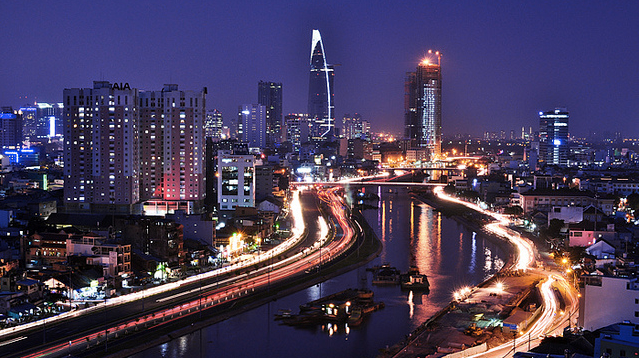 For a crazy night down Saigon’s legendary “Bui Vien”, grab a taxi to “Crazy Buffalo” and walk your way down from there. Also known as Backpacker Street, it is where people of all ages and nationalities mix with the locals for a long and crazy night. This place is 24/7 but really comes to life at night and there is an endless mix of western style bars, restaurants, nightclubs and music which accompany the cheaper more traditional Vietnamese outside bars, with tiny plastic stools. There are happy hours on beer and cocktails everywhere. There are also excellent souvenir and cheap clothes shops. Head down the side streets for cheap massages and some lovely little cafes.

Built-in 1897 by architect Eugene Ferret , The Municipal Theatre of Ho Chi Minh City ( it’s official name ) is a classic example of French Colonial architecture in Vietnam. Closed and used for many purposes during WW2, the French War and the infamous American War, it was not until after the fall of Saigon in 1975 that it was restored to its original purpose. It has – and does – host a variety of cultural theatre including bamboo cirque, contemporary & traditional dance and classical concerts, as well as – obviously – Opera.

Across the road from The Saigon Opera House is the historic Hotel Continental. Like most iconic landmarks & attractions in Saigon, it was built by the French in the late 19thCentury and opened in 1880. Many famous people have stayed here in this time, but it has always been synonymous with writers and authors, not least Graham Greene who lived here ( in room 214 ) who wrote the well-known novel “The Quiet American” in 1955 about the complicated and bloody period between the French Colonists and the American involvement in the Vietnam War. Still outstandingly elegant, come here for an outstanding meal or cocktail and you’ll be eating or sipping ( or even sleeping ? ) in the company of Saigon history.

One thing that Saigon does well, are night tours.  The Internet is a good place to look but also venture down Bui Vien,  and it’s side-streets & alleyways, in the daytime to see the options on offer which are advertised everywhere you look. Whether it be a local traditional food tour, a guide taking you to late-night food markets, motorbike secret tours of the city or dinner on the Saigon River, the choice is endless and always good value for money.  They are always in small, busy & fun groups with excellent English-speaking guides who are able to answer any query that you have.

Inspired by the lotus which is the national flower of Vietnam, this 262m tower ( or flower ? ) opened in 2010 and now looks over the whole city, where it can be seen everywhere you go. It now represents the integration of modernization of Saigon over the more traditional values of the city. Inside there is a cinema, food court, a fine dining restaurant and nightclub; but the highlight is the Saigon Skydeck Cocktail Bar which offers 360 degrees panoramic views, and the attached helipad which is fast becoming famous as an iconic symbol in – and over –  Saigon.

What makes us special?